An experience of "Ryukyu Kobudo Seminar" : A Report from an English Student.

Having only been living in Japan for three months and having not practised karate since my early teens, when I was invited to a three-day intensive seminar in Ryukyu Kobudo by my sensei I thought it must have been some kind of joke. Surely it would be far too difficult, it would be full of black belts honing their skills and no place for a complete beginner. I'm so happy to say I was completely wrong!

Thanks largely to the welcoming atmosphere created by Grand Master Sakagami, my friend (who was also a complete novice) and I felt at ease right from the start, despite being in what could have been a seriously intimidating situation, surrounded by people who were experts in martial arts and who practised with weapons regularly. Another thing that made the environment so interesting was the international aspect of the seminar, with people from all over the world having come to Japan specially to train under expert supervision. Over the three days the nationalities involved included Japanese, Swedish, Filipino, Vietnamese, American and British, and this diversity was a great opportunity for cultural exchange while working together to improve our technique.

On the first day we covered Nunchaku, Sai and Tonfa all in quick succession, which you would think would be overwhelming, but the detailed instruction combined with regular drop-ins from the Grand Master meant that by the end of the day we felt like we'd had a thorough grounding in all three skills. We were taught all the basic moves and drilled thoroughly before putting them together in a number of different katas, and though I found some more difficult than others (Tonfa are heavy!) I finished at 5pm feeling like I actually sort of knew what I was doing.

The next two days were focused entirely on Bo, and rightly so because it's a lot harder than it looks! Saturday was an intense condensed course on all the techniques we'd need for the basic katas, and by the end of it my friend and I were both a little overwhelmed by the sheer volume of information we'd had to take in, although we were reassured that it was normal to feel that way and we would recap everything the next day. In the morning we arrived at the dojo tired and achy but ready to be thrown right back into it, covering new katas and finishing with a little sparring to put our newly learned moves into action. Even after a solid three days of hard work, by the end I didn't want to go home and I felt like I could have carried on for another week, despite being covered from head to toe in bruises.

Before beginning this seminar I was half-wondering what on earth I was getting myself into. Was it really a good idea to show up to a class that was probably going to be full of seriously experienced martial artists who were looking to hone and perfect their Kobudo skills? I'm so glad I took a leap of faith because it was one of the most enjoyable experiences I've ever had. It's very enriching to learn a new skill at such an intense pace, and thanks to the instructors the information was delivered in a comprehensive and engaging way (in both English and Japanese!) which meant that we were taking in as much as we possibly could. I had never really considered Kobudo in the past and knew virtually nothing about it, but now I'm hooked and I hope to continue to practice as often as I possibly can!

With Grand Master Sakagami and students from the world 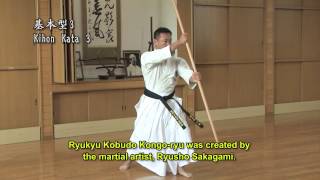 Trip to Japan from Scotland in 2019

A student from USA visited Kongo-ryu Headquarters in Japan. アメリカから生徒さんがいらっしゃいました！

Research from a Tag